[Krayzie]
The name is Krayzie, big bad ass bone,
Wanted up north for all the gold that I stole,
Along with some cash I even took the mayor's daughter,
Now that there's kidnap, but she was with us so I brought her.
Dun got myself into a whole heap of trouble,
Double-crossed by the law so it's nobody to run to,
Yeah it's just me and my sawed-off shotgun,
I dun now call him 'Leatherface'.
I'm headed for the west heard they got a couple banks in town
That ain't been held up yet, well uh, I ought to make it by sundown,
I figure that's enough time for me to get the whole rundown,
So I continue my mission, it's gettin' dark
So now I'm watching for them damn injuns,
They like to catch up then they rob -n- split.
I'll be a rootin' tootin' shootin' damn fool, protectin' my chips.
All of a sudden, I heard somebody rumble in the bushes, stopped my horse,
"Whoa nelly! Who in the bushes, you better speak up,
Or I'mma let my shotgun's song sing out."

[Woman]
Who's this? Hope this ain't the law, draw out the bushes with my sawed-off shotgun.

[Krayzie]
"Come on out right now I'm gettin' angry."
Took a step back 'cause it could get dangerous.

[Krayzie]
"Then why the hell is you hidin' in them bushes"

[Thug Queen]
"I'm wanted in 4 counties, for armed robbery, killed 2 sheriffs, 6 of his best men with my head,
Stole 2 horses, thought you was the law that's why
I jumped in the bushes."

[Krayzie]
"Goodness."
Now she was hotter than a barrel of fire but I could use her for the job so I told her to ride.
"Come on."

[Thug Queen]
"May I ask you what you headed to the west for?"

[Krayzie]
"I got a partner got a plan for some dough and if you're down you can pick up yourself a pretty penny.
Be in town in a minute now be sure if you're with it."

[Thug Queen]
"We be up before the sun rise got a stall(ion) here for your partner to ride hit the saloon before the moon shine down for whatever let's ride let's ride."

[Krayzie]
"These directions say we go to Tucson, Arizona.
When we arrive we'll cop a place we can bunk,
And meet my boy in the morning for details -n- hookup."

[Rooster crows]
[Krayzie]
"Rise -n- shine, good morning, howdy.
Nine o' clock we meet my boy in the saloon in the valley.
Now I dun came a long way and I don't wanna be late.

You better count your money [2x]

[Layzie]
"I'm peepin' Krayzie's 'Wanted' poster in the saloon,
So I assume it'll be trouble round here pretty soon.
Glanced across the room I seen this youngster gettin' ready to fight
But if he mess up tonight I think that Krayzie just might take his life.
So I approached him and I paused.
"Look man, I really don't wanna brawl, but won't you chill before them laws,
Come messin' up this master plan,
Since he already rowdy I'm just asked the man (dang).
You want some work well partner put in your bid
And by the way now what's your name, they call me Layzie the Kid."

[Other dude]
"The name's Powder Pete, can I get a 12 gauge!
Outlaw every day, on the front page.
Mister Kid, if you give me the low-down me and Blackjack,
Be ready for the showdown, with 2 double-barrels pointed at whatever,
We'll stick together, I'm pretty clever."

[Layzie]
"So saddle up, jump on the bandwagon because it's all goin' down."
I heard the guy runnin' the bar screamin' 'Krayzie's in town.'

[Krayzie]
"Now when we get to this saloon, you don't worry, wait outside.
Don't be stealin' nobody's damn horses."
Stepped inside the bar.
"Layzie Kid you son of a gun!"

[Layzie]
"Hey man I'm glad you made it safely, now let's go have some fun.
And this my partner Powder, he's a young gun.

[Thug Queen]
"Howdy partner, already got the horses saddled up."

[Layzie]
"I hope you're good at robbin' banks like you rustle that cattle up."

You better count your money [8x] 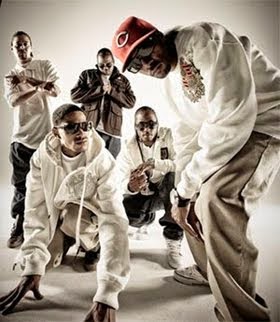